For the last couple of years I have been trying to make the transition from being primarily an illustrator with an interest in story making to being a story maker first and foremost.  How well this is working I don't know.  One effect it is definitely having is that I am trying to look for useful patterns and principles in story structure much more.  This is all very subjective of course but it would be odd if I didn't try and make the kinds of stories that I myself find engaging.

Here's an example of something I noticed as it applied to drawing, which lately I have found can be very useful in storytelling too...

When I was at art college I was for the most part having a lovely time making up comics that never went anywhere and drawing characters for them.  Often we would be set briefs that had nothing to do with the stories I was working on.  At such times I would usually find a way to shoe horn my own stuff in somehow... Then came the ‘Tea' project.  The brief was to design an advertising campaign that would make tea appealing to young people.  This project managed to touch three sore points at once.  Firstly, I didn't drink tea then and seemed to spend half my life declining offers of it; secondly, I had decided that advertising was something I most definitely was not interested in getting into; thirdly, I had no conception of myself as a young person because I didn't seem to like any of the things I was supposed to as one.  This is similar to the feeling I get when I read the Guardian newspaper today.  I can tell that it is meant to be for my demographic and yet I don't understand most of the stuff in it.  This makes me feel odd.  Try as I might I could not find a way to use the story I was making about a giant bald woman who kidnaps a thumb sized baby.  So I got cross.  I thought, aaargh! You want something that appeals to young people, that's exactly what I'll give you!  (obscenities blacked out for decency's sake!): 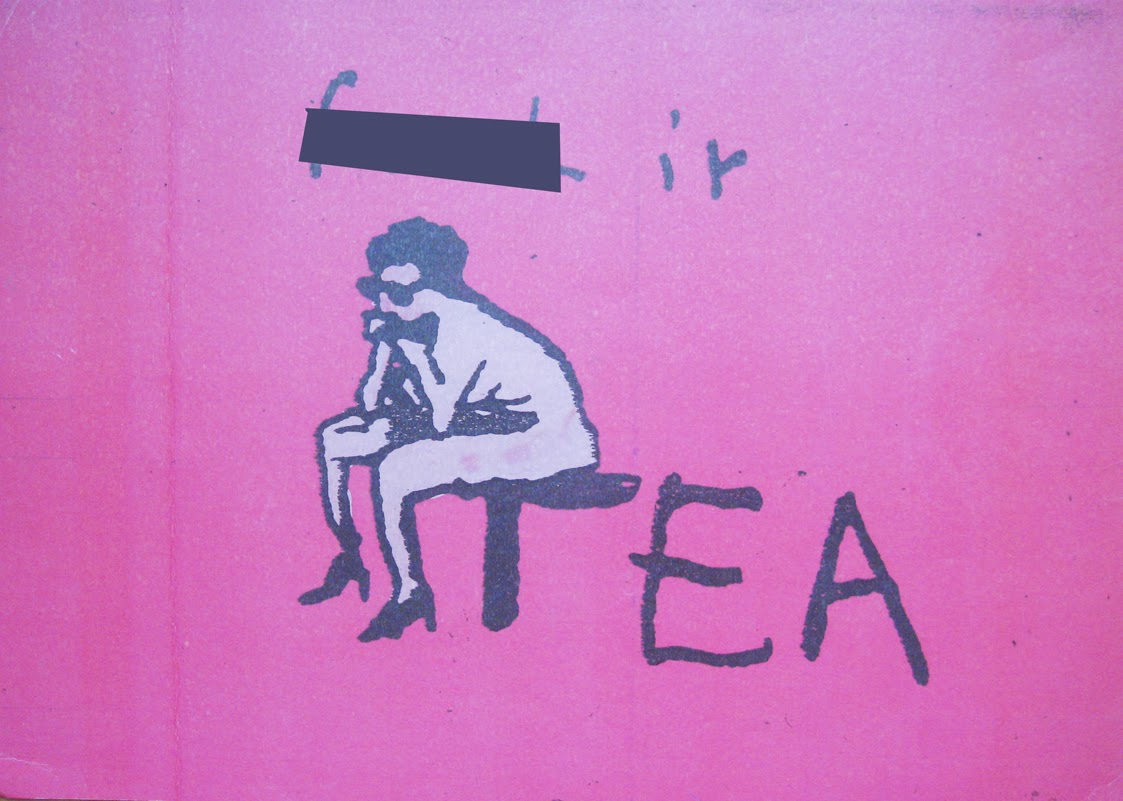 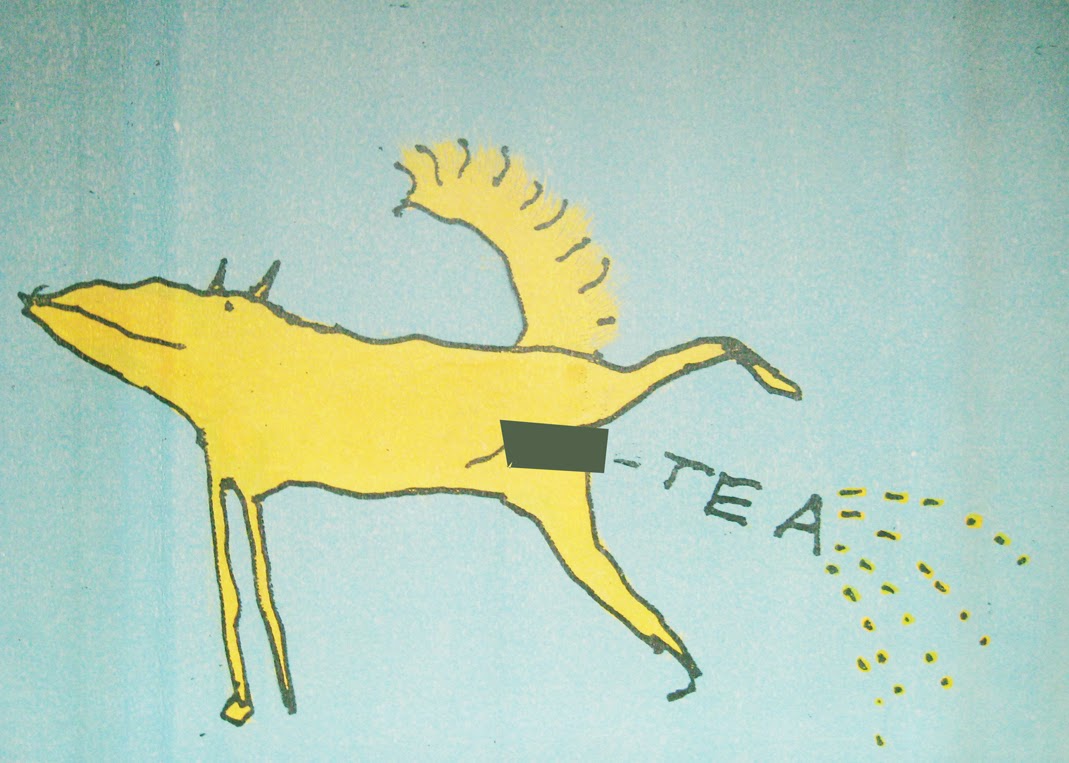 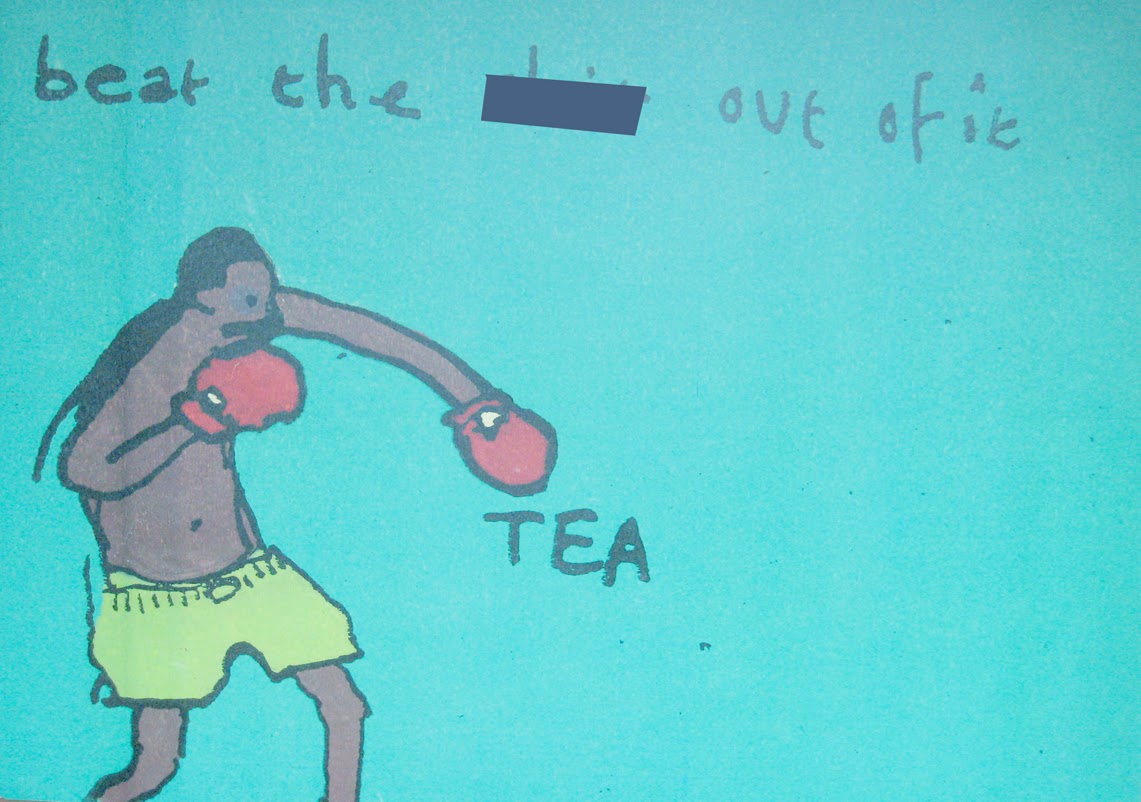 And can you guess what?  They were the most popular thing I did in college.  All those precious stories that I'd slaved over for months and everyone wanted the naked lady straddling the letter ‘T' instead.  It's like I was saying in my post ‘when it's right it's right', sometimes the hardest work is the dullest to look at.  I think if you work with a free spirit it can be very infectious.  I have been driven to this mental state by despair several times in my career and it has always been very helpful.   For my first picture book, Slow Loris,  I tried again and again to get the artwork right - it was my first book and I wanted it to look spectacular - in the end I gave up and painted over photocopies of the dummy instead (might post more on that later).  Before I came up with my second book, Beegu, I tried character after character and was repeatedly told they weren't appealing enough.  In a fit of rage I drew the most saccharine being I could imagine and voila, they were thrilled.  It never occurred to me to think that my finding the original design for Beegu excessively cute might be a good thing!  I love Beegu like my own child now!

Since these experiences I try and remember not to make things a grand labour if at all possible.

Here is one application of this idea that I have noticed recurring in stories that I like.  It seems to me that if every character in your story is entirely on message and engaged with the world you have created it can be very off-putting for the reader.  I find that I am drawn to stories where not every character follows the grain:  Reluctant characters, perverse characters, selfish characters, irreverent characters.  They are often the catalysts for action too.  Think of it in these terms, which is more interesting, I pull on a rope and it yields or I pull on a rope and it resists, it resists, it resists...  Engaging narrative is almost always about challenge, conflict and difficulty, to my mind at least.  As a story maker and the creator of every character in any given narrative I think it is all too easy to omit voices that dissent, that are unimpressed or disinterested but these can often be the most fascinating.