It is my one hundredth post already.  How time flies... Here's something a bit different by way of celebration.

People who visited my old website might have seen pictures of a toad called Morstrum there.  This is the beginning of the story he comes from.  It fits into the world of the villagers mentioned in my post, story number one, along with the Priest's and the Herder's stories in Loaf magazine and the Sea Captain's story on Soundcloud (see the link in the sidebar).

THE DOCTOR'S STORY. CHAPTER ONE 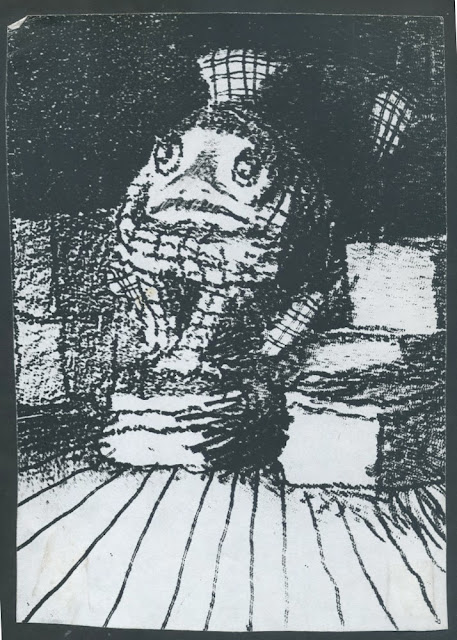 All was not well.

Morstrum sat alone in his evening chair, as close as he dared to the fire.  He liked the light and wanted to be near it.  He profoundly disliked the other bit, the searing, crisping heat of it.  There were ancestors of his, not so very far removed, who had been toads.  He had a horror of drying his skin out.
Above the fire a little pan of worms bubbled away.  Morstrum kept getting up to check they were not burning.
Outside, all around was an enormous forest, the Great Mizzle, dense and dark and damp.  He couldn't get it out of his mind, thousands upon thousands of trees on his doorstep.  It was a world he didn't know, he realised, though he had been there many times before.  During the day the green of it was so intense that it seemed to dwell in the air itself.  It wasn't the same at night.
Morstrum sat alone.  His possessions sat with him.  They were the things he had been close to, every night, for all of his life.  Tonight they brought him no comfort.  Mostly, they were in boxes.  A strange collection of new feelings was building up inside him.  It was the first time he had moved house.  He had not known until now, for instance, that he was afraid of the dark.  Though, in truth, the darkness seemed different here.  It was a Mizzle-dark.  Time passed slowly in its company.  Last night, Morstrum had gone to bed in his house in the village, blown out the candle and never given it a second thought.  Tonight, he had imaginings.  He had an imagination.  That was a disturbing thing to discover at his stage of life.

The forest was, at one and the same time, so very alive and so empty.  He had thought it was what he wanted.  Already he began to have doubts.

The chance to make the move had come quickly, in the matter of a month.  For years he had been tied to his home by the need to look after his brother, Grogan.  One by one he watched his friends grow up and leave the village.  But Morstrum would not leave.  Morstrum cared for his brother; he cooked; he cleaned; he had done so since before their parents died.  Despite all his efforts though, Grogan did not get better.  There was a time when Morstrum read everything he could find on the subject of health and disease but he found neither cause nor cure.  Whatever the sickness was, it was chronic.  It would not let them go.
Eventually, one or two of the villagers took to seeking Morstrum's advice when they themselves felt ill.  As best as he could, he helped them.  There was talk of a doctor, a real doctor, who lived far away beyond the Great Mizzle, but no-one was about to make that journey with Morstrum on their doorstep.  And he embraced it.  He set himself up in business.  One afternoon he and Grogan painted a sign.  Beneath an image of a toad, deep in thought, it read simply, 'Morstrum, Doctor'.  They hung it above their door.
Thenceforth, Morstrum's Tuesdays, Wednesdays, Thursdays and Fridays were taken up with the ills of the village, notwithstanding the occasional emergency.  On Saturday he marketed; on Monday he did the housework.  Thus ran his routine.  His favourite day of all the week was Sunday, for every Sunday he and Grogan (health permitting) would don their tweed, outdoor jackets and embark for the Great Mizzle.  Once there they would gather the roots and lichens and mosses that Morstrum used in his cures.  They would also look out for mushrooms and worms and tasty things for their dinner.  Most of all though, they would stretch their legs and breathe the close, damp air.  It was wonderful.  Morstrum felt like a timeless and ancient thing, a simple toad of the forest.
When the gathering was done, the two of them would wind their way home along the track, deeply soggy and contented.  That was when they passed the hut.  It belonged to a wizened old tree root of a creature.  Everyone called her the old Stoll.  Goodness knows what her name actually was.  She had known Morstrum and Grogan since their earliest days on this world.  She was kind to them.  If she saw them passing by she would call them in and they spent countless happy afternoons in the hut, drinking weird tea, listening to stories from long ago and drying out... just a little.

Then, one day, Grogan died.

At a stroke the rhyme and the reason drained from Mortstrum's life.  What kind of a doctor was he that he had not seen this coming?  He struggled on with his routine for a little while.  It couldn't last.  All of the familiar things had become tortures.  It was all so far away, he thought.  He couldn't touch it.  It wasn't real.  Morstrum took down the sign and locked his door and didn't talk.  He got so desperate that he took to gulping down his own medicines.  As far as he could tell, they had no effect.  This only served to depress him further.  For perhaps a month he lived like this.  Then, one night he woke up and he knew that if he didn't leave that house at once, there would be no more Morstrum.  The very next day he found out the news: The old Stoll was gone from her hut.

It was Mortstrum's hut now.  In the circle of firelight he could see himself (his hands, his feet, his belly) and his packed up possessions and that was all.  They were the things he was used to.  He tried hard not to think about the other things, the things he couldn't see.  The worms bubbled on.  Morstrum got up to check on them.  The old Stoll's hut was far bigger than he remembered.  It had more than its fair share of corners.  The main room where he now sat was large in itself.  The firelight couldn't fill it.  There were other rooms though: there was the little hallway with a place to rest your stick and hang your coat; there was the bedroom; there was a room he expected he would use as a library; there was a too-big room for bathing and washing your clothes; there was a pantry; there was also another little room, a room he had no idea what he would do with.  He peered into the pan.  There were the worms, perfectly pallid and unspoiled.  What was that smell then?  Probably just his imagination.  He would have to get used to that.
The floor of the hut was laid with many wooden boards.  There was barely a gap between them. The boards were a pleasing sandy colour that gave the hut a cheerful look by day.  The firelight suited them too.  They were happy boards...  It wasn't really a hut at all, he thought.  He suspected that bungalow was the proper word, though it didn't sound so romantic.  Tasty worms, evening chair, all his possessions around him.  Things were good, weren't they?

There was a knock at the door.

Morstrum froze.  His insides misbehaved.  He had a sudden sickening sense of himself on show, the only light thing in a world of darkness.  Sincerely, he wished that he had put up curtains.

"Yes?" Morstrum called. "Who's there?"
There was no answer.  Morstrum found that he was very afraid.
"Who's there?" He called again.
One of these boxes had a blunderbuss in it.  Should he get it?  He didn't remember which one it was in.  He imagined the view he would give the outside world as he scrabbled about trying to find it.  He picked up the poker instead.

"Who's there?" he called and louder.  He thought he heard footsteps outside the front door.  Morstrum's heart began to hurt him.  Slowly, ever so slowly, he backed away towards the nothing room.  It was dark in there.  It overlooked the veranda.  As quietly as he could, he closed the door and stole up to the window.  At first all he could see were the black shapes of tree tops against the sky.  Then, as his eyes grew accustomed to the dark, he thought he could make something out among the plant stems in the garden.  Something was moving.  Something, a little form, was flitting to and fro.  It was dancing.  Was it dancing?  It skipped and twirled and ran about in the most particular way.  Sometimes it would freeze stock still or drop down to the ground, only to burst into frantic life a moment later. Now Morstrum became aware of a second shape.  This one was drawing closer.  Morstrum stepped back and gripped the poker yet more tightly.  As he watched, it stepped into the pool of firelight.
It was a child!  It was a child far from any that he had ever seen, made from a stuff he did not know.  Its hair played about with the wind. In the flickering light, the little eyes shone.  As it came near it seemed half flying, so lightly did it tread.
The forest!  It was the spirit of the forest come to life!  All the old Stoll's stories came flooding back to him.  So, the stories were true, he thought.
Morstrum pressed his face to the glass and strained his eyes to see.  It was on the veranda now, peering in at the room where he had been.
All at once there was another face an inch away from his.  Morstrum yelped and leaped back in surprise.  He tripped and hit himself in the head with the poker.  In an instant he was up again but the face was gone.  He peered out but the two little shapes were nowhere to be seen.  Morstrum rushed around, upsetting several boxes of ornaments in his haste.  He threw open the front door.  The blackness yawned before him.  From far away in the forest he heard the sound of laughter, growing fainter all the time.