the world is your oyster or candlestick or hat or whatever

Observational drawing is good for you, right?  I certainly think so.  I have never been much into sitting in front of something for hours on end and trying to make an exact duplicate of it though.  We have cameras for that.  There are loads of things that you can do with a drawing that you can't do with a camera.  One of the most useful is the power you have to recombine elements you have observed into entirely new arrangements.  I use this all the time when drawing moving subjects like people or animals.  They are almost always going too fast to get as much information as I would like so I have a couple of tricks for collaging several together. If the subject is say, a cat, it might well be moving constantly but it will also be repeatedly hitting the same sorts of pose or taking the same sequence of steps.  If you have a few drawings on the go at once you can wait for each pose to come around in turn and work on the related drawing when it does.  With people, I often like to draw them in segments, taking a posture from one subject, a hairdo from another, shoes from a third etc.  This has the added bonus of making the people you ultimately draw unrecognisable should any of the subjects happen to see your sketchbook.  It also means you don't have to gaze intently at one poor fellow for hours on end.  Knowing you are being drawn is like having the sensation you get when someone is taking your photo stretched out over half an hour.
Another way you can use this idea of collage is one I have been using a lot lately.  I will go to a location full of interesting stuff or stuff that is likely to be relevant to what I am trying to draw.  For example, next week I have to make up some robots so I will go to the Science Museum.  When I am on site I will continue to work on my subject just as I would if I were in my studio at home but every time I get stuck for an idea, for a shape, for a decoration or a mechanical element, say, I will look about and take the first thing that seems to fit and draw that.
Here are two images for the Bell X1 album booklet that were drawn this way in the Horniman Museum: 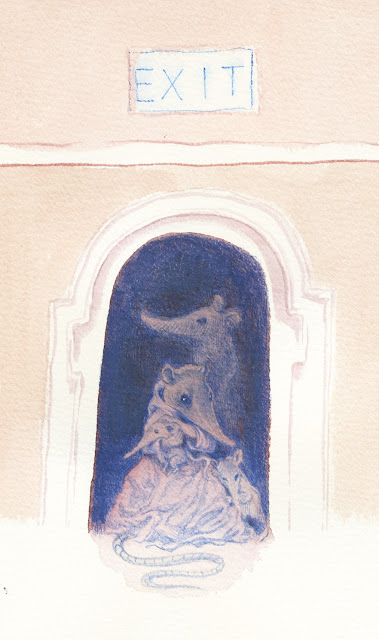 I wanted to make a picture of a family begging in a doorway.  The characters are all derived from a stuffed elephant shrew they had in the collection.  For some reason I thought that would be just the thing.  The doorway is taken from one of the doors there and I made up the dress. 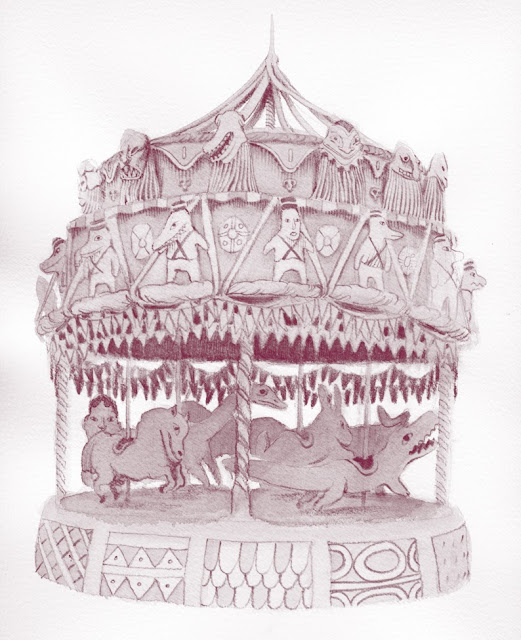 You might recognise this one as I've posted it before... they even made a t-shirt out of it ^-^!  This is much more of a hotch potch and I can't really remember where I got all the pieces but I can remember the sequence they came in.  I began by sketching the shape of a carousel from my imagination, then I filled it up with as many characters, creatures and textiles as I could find to fit in their main gallery downstairs.   I began by filling the roof of the carousel and the main source for that was this giant Ijele mask they have there...

Anyway, if you ever get stuck for stuff to draw or bored with slavishly sticking to exactly what you see in front of you, give this a try!
Posted by Unknown at 01:44