Sorry for the radio silence of late.  I have been wracking my brains trying to solve the Mr Punch story.  Mr Punch is tricky because he is hilarious to write for and to draw but he is a family annihilator, which, lets face it, is one of the most despicable things it is possible to be.
As with many of my stories, the theme of this one is that of finding your true family and forging the bonds of family irrespective of the ties of blood.  The fact that Punch killed his last family puts a pretty epic damper on that theme.  I knew that at the very least Punch would have to suffer colossally for the story to be able to end happily but even so I still couldn't make it work.  The problem was that I thought Punch needed to reform to make a satisfying ending.  I had a talk with Viv about it and she pointed out that Punch was highly unlikely to reform... ever.
Today I think I finally worked it out.   First off I just couldn't have Judy and Punch's Baby be dead, so they make an appearance.  As does indeed happen in the world of Mr Punch, it is suggested that he has killed them many times, but being eternal beings (like Mr Punch himself), they just keep coming back.  Secondly both Judy and the Baby are totally rancid people... just like Mr Punch.  The last piece came when I realised that if Punch was incapable of change then he would need to find someone who liked him exactly the way he was.
The story has pretty much written itself now.  It has all the set pieces and plot points in place, a  beginning a middle and an end and several fully scripted scenes... now I will polish it up and see if anyone wants to buy it ^-^ 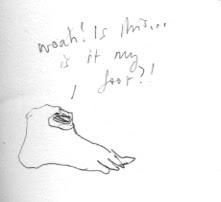